Focusing on agriculture shows not only the scale of problems to be tackled but also how an economic sector can change and how education can address the changes. Globally, some 70% of people in extreme poverty live in rural areas (IFAD, 2011b) where agriculture is the main source of income and employment, and access to land serves as a tangible source of security despite natural disasters and weak economic opportunity. Solutions for global poverty must address the needs of agrarian societies and ensure the sustainability and productivity of agriculture. Agriculture provides the world’s food supply, and major factors affecting it also affect the world’s economy and ecosphere.

Agricultural production is the main emitter of carbon dioxide in the global food system (Vermeulen et al., 2012). Increases in carbon dioxide contribute to climate change, which in turn has a negative effect on crops. Yields of wheat, rice and corn are expected to fall in coming years, even as growing populations will need more to eat. By emitting high levels of greenhouse gases, conventional agricultural practices present a barrier to the main challenge they seek to address, potentially leading to food shortages instead of food security. 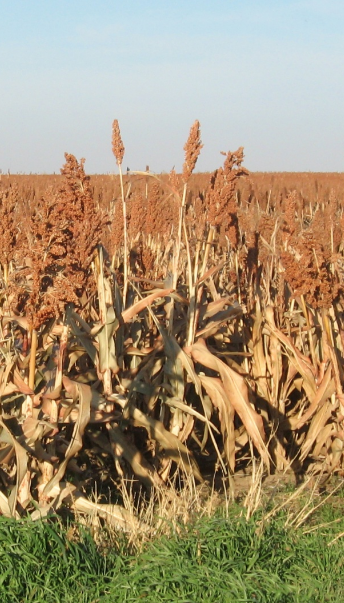 Agriculture worldwide faces an unprecedented challenge over 2015–2030. Of all economic sectors, it is the most directly affected by environmental degradation.

The cultivated and arable land is being lost to desertification, soil erosion and salinization, and urbanization. Climate change is altering temperature and rainfall patterns. Extreme weather is causing ever more frequent and intense damage to crops and cattle (Godfray et al., 2010). Groundwater depletion, from China and India to Saudi Arabia and the United States, is affecting harvests and could contribute to significant food scarcity (Wada et al., 2010). These phenomena will intensify, threatening agricultural productivity. 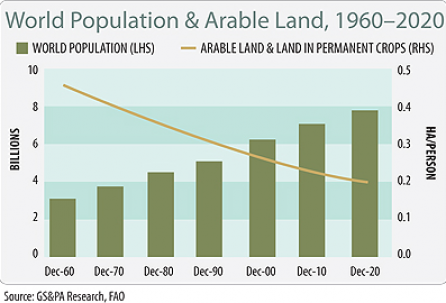 At the same time, population growth requires a huge but sustainable increase in food production to ‘end hunger [and] achieve food security and improved nutrition’ (SDG 2). The global population, is expected to reach 8.5 billion in 2030, with nearly four-fifths of the increase taking place in low and lower-middle-income countries, especially in sub-Saharan Africa and Southern Asia, where the food supply is the most fragile. According to various sources, the productivity of existing crop and pasture land would need to increase by 70% to 100% to feed over 9 billion people by 2050 (Godfray et al., 2010).

Conventional agriculture – the manufacture and distribution of seed, feed, fertilizer and pesticides; the growth and harvesting of crops, livestock, fish and wild foods; and along with primary and secondary processing, distribution and waste disposal – cannot respond to these challenges, as it causes environmental destruction and its future productivity is uncertain.

Along with energy and transport, agriculture is one of the sectors that contribute most to environmental degradation. It occupies 40% of the Earth’s terrestrial surface, accounts for 33% of greenhouse gas emissions and causes loss of genetic biodiversity and functional ecosystems. The ‘green revolution’ that took place mainly in Asia in the 1960s and 1970s was ‘green’ only in the sense that it concerned agriculture, not in the sense of environmental preservation. Future increases in food production must not entail the unsustainable use of land, water, energy, fertilizer, and chemicals (Alston and Pardey, 2014; Dobermann and Nelson, 2013; Pretty et al., 2010).

Conventional agriculture may be reaching a productivity limit. According to the Food and Agriculture Organization (FAO), the index of per capita net production for agriculture as a whole increased less rapidly over 2008–2013 than over 2003–2008 in the Americas (4.1% vs 10.3%), Asia (7.9% vs 15.3%) and Europe (3.4% vs 5.5%) (FAO, 2016). Increases in agricultural productivity were concentrated in developed countries and Asia. In sub-Saharan Africa and in low income countries in other regions, most growth in production since 2000 was due to use of new land rather than higher factor productivity (Dobermann and Nelson, 2013). Food prices, which had mostly declined steadily since the 1960s, started to increase in the 2000s, and have become more volatile due to speculation on financial markets. Major price increases in 2007 and 2008 especially hit the poor (IFAD, 2011a).

Food distribution and consumption patterns are compounding the negative impact of food production on the environment. In developing countries, rising per capita income has led to tastes shifting away from cereals, pulses and vegetables and towards meat and dairy products, whose production is much more intensive in use of water, fodder, and chemicals (Pretty and Bharucha, 2014).

The major concern, however, is food waste, which represents 30% to 40% of food produced globally. In developing countries, most food waste arises on farms and in transport and processing due to deficient food-chain infrastructure. In India, for example, 35% to 40% of fresh produce is lost. This waste could be reduced through improved small storage facilities (Godfray et al., 2010). In developed countries, food waste takes place mostly in retail, food services, and homes due to consumer preferences for ‘foods of the highest cosmetic standard’ and inflexible adherence to ‘use by’ dates (Godfray et al., 2010)